Meet the members of the Nationalism Studies Program 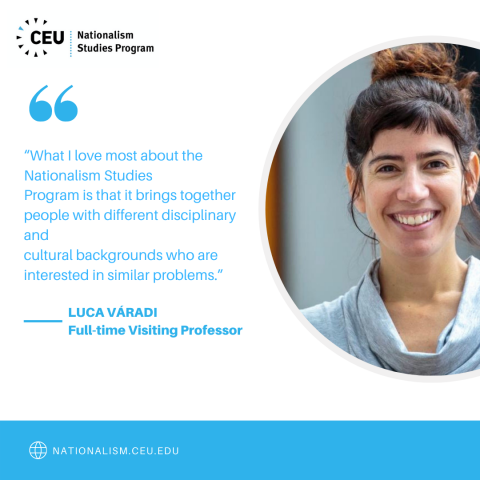 Luca Váradi is a former Marie Sklodowska-Curie research fellow and recurrent visiting professor in the Nationalism Studies Program. Her research focuses on ethnic prejudices and especially on the formation of prejudice in adolescence.

Luca is currently lecturing the following courses in our department:

Social Research in the Making: Developing Research Projects in the Field of Migration.

She has also supervised many of our students and helped them shape their research to outstanding MA theses.

It is especially important for Luca to make sure her research results reach those who can use them that’s why she works together with different NGOs and teachers in prejudice reduction programs.

“What I love most about the Nationalism Studies Program is that it brings together people with different disciplinary and cultural backgrounds who are interested in similar problems.” – Luca Váradi 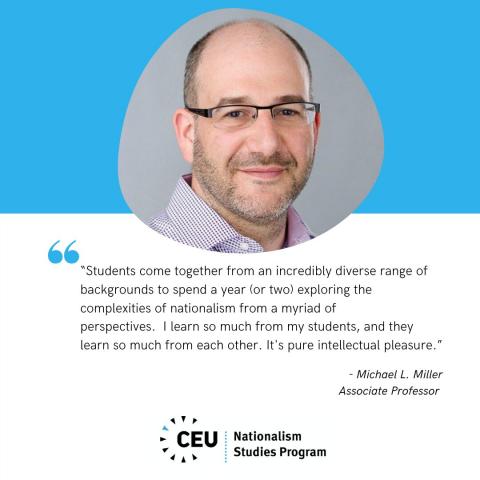 Michael L. Miller is an associate professor in the Nationalism Studies program at Central European University in Budapest, and co-founder of its Jewish Studies program. He received his B.A. from Brown University, where he specialized in European History and Old World Archaeology and Art. He received his PhD in History from Columbia University, where he specialized in Jewish and Central European History. Michael’s research focuses on the impact of nationality conflicts on the religious, cultural, and political development of Central European Jewry in the nineteenth and twentieth centuries. His articles have appeared in Slavic Review, Austrian History Yearbook, Simon Dubnow Institute Yearbook, Múlt és Jövő and The Jewish Quarterly Review. Miller’s book, Rabbis and Revolution: The Jews of Moravia in the Age of Emancipation, was published by Stanford University Press in 2011. It appeared in Czech translation as Moravští Židé v době emancipace (Nakladatelství Lidové noviny, 2015). He is one of the authors of Zwischen Prag und Nikolsburg: Leben in den böhmishcen Ländern (Vandenhoeck & Ruprecht, 2019), which will appear in English as Prague and Beyond: Jews in the Bohemian Lands (University of Pennsylvania Press, 20201). He is currently working on a history of Hungarian Jewry, titled Manovill: A Tale of Two Hungarys.

Under the Double Eagle: Nationalism and Supranationalism in the Habsburg Lands
Zionism and Palestinian Nationalism
Jews and the City
Comparative Diasporas

“Students come together from an incredibly diverse range of backgrounds to spend a year (or two) exploring the complexities of nationalism from a myriad of perspectives.  I learn so much from my students, and they learn so much from each other.   It&apos;s pure intellectual pleasure.” 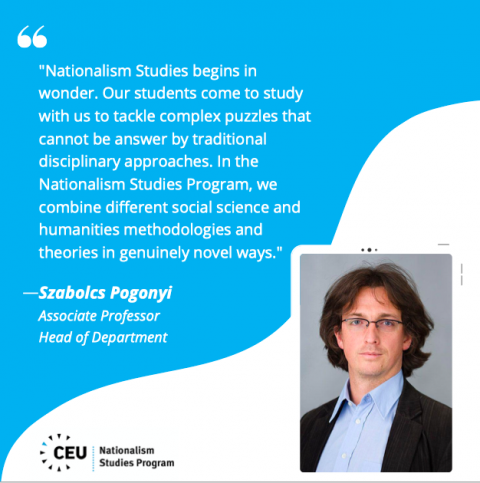 Our next professor from Nationalism Studies Program’s “Meet Your Future Professor” series is the Head of the Department Professor Pogonyi Szabolcs.

Szabolcs Pogonyi is Associate Professor in the Nationalism Studies Program at Central European University. His current research focuses on diasporic nation building, transborder minorities, non-resident citizenship and external voting. He is the author of several articles in political theory and editor of books in the history of political thought. His research on contemporary Hungarian diaspora politics and transborder nation building (Extra-Territorial Ethnic Politics, Discourses and Identities in Hungary) was published by Palgrave Macmillan in 2017. 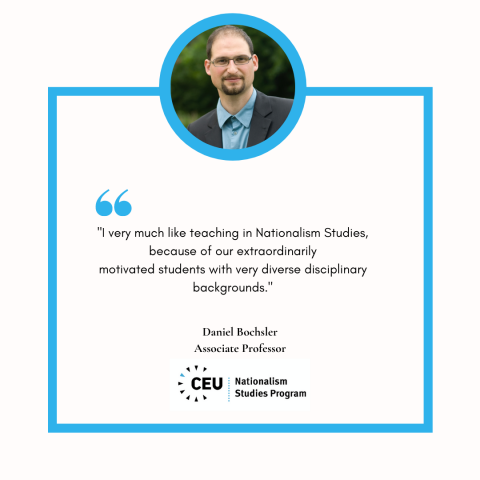 "Nationalism Studies begins in wonder. Our students come to study with us to tackle complex puzzles that cannot be answer by traditional disciplinary approaches. In the Nationalism Studies Program, we combine different social science and humanities methodologies and theories in genuinely novel ways."

As a political scientist, Daniel Bochsler deals in particular with countries transitioning to democracy, and the challenge to establish democracy in countries with multicultural societies. Large parts of his research deal with Central and Eastern Europe. He has lived, worked and travelled in the region in the last 15 years.

"I very much like teaching in Nationalism Studies, because of our extraordinarily motivated students with very diverse disciplinary backgrounds."
Fun fact: Daniel also teaches at the University of Belgrade.