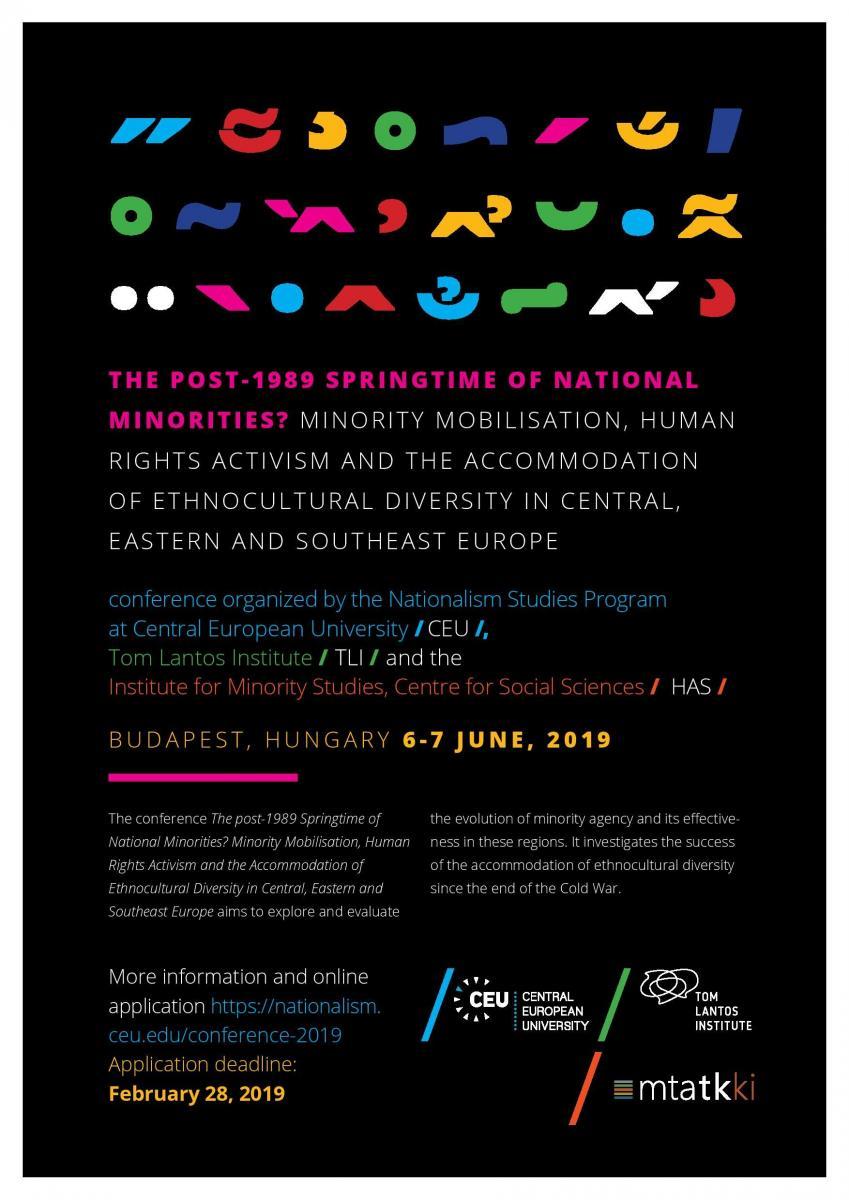 Institute for Minority Studies, Centre for Social Sciences, HAS

The conference The post-1989 Springtime of National Minorities? Minority Mobilisation, Human Rights Activism and the Accommodation of Ethnocultural Diversity in Central, Eastern and Southeast Europe aims to explore and evaluate the evolution of minority agency and its effectiveness in Central Europe, the Balkans, and the former Soviet Union. It assesses the mobilization strategies of minority actors and the success of their claims-making since the end of the Cold War. It investigates the efficiency and robustness of minority policy regimes which were set in place with the aim of accommodating ethnocultural diversity in these regions.

In countries of the former socialist bloc the political changes of the 1989 ‘Autumn of Nations’ were often interpreted as a positive turning point in the situation of national minorities. It was believed that in the process of democratic transition the social, economic and political marginalisation and exclusion of minorities would be addressed and ethnic tensions prevented. However, contrary to the hopes of many, in some cases democratic transition exacerbated ethnic polarization and conflict. As the Iron Curtain fell, nation-building intensiﬁed not only in the Yugoslav and Soviet successor states where new international borders were erected, but also in those countries whose borders became more permeable. In reaction to these ethnic conflicts, minority protection regimes including norms, institutions and mechanisms were established at both global and regional levels including Europe. These venues and normative instruments opened up new opportunities for minority mobilization along principled narratives. Informed by international norms, often under external or bilateral pressure, minority protection laws and minority policy regimes were set up to promise justice and peace for the disadvantaged.

The conference invites papers exploring national, transnational and international minority mobilisation and activism since 1989 and the analysis of the effectiveness of existing minority laws and minority policy regimes. We are also interested in the examination of unsuccessful or failed minority aspirations and the reasons behind such failures. Single and comparative case studies as well as empirical research are welcome. Disciplines represented include political science, sociology, international relations, anthropology, political geography, history, legal studies, economics, philosophy and related fields. Inter- and multidisciplinary approaches are appreciated.

Special attention will be given to the following themes:

A limited number of grants (covering travel expenses and free accommodation in the CEU dormitory) offered by the Nationalism Studies Program at CEU and the Tom Lantos Institute are available for PhD students presenting a paper at the conference. Applicants for the travel grant should indicate the requested amount in the Fact Sheet (see below).

The conference invites proposals for individual papers, or panels, or book panels.

Each applicant – single or multiple authors in individual proposals, every member of a panel proposal – must submit the online application form available at https://goo.gl/forms/dff1qCB9cUvVOsDD2

The receipt of all proposals will be promptly acknowledged electronically, with some delay during deadline week, due to the high volume of proposals.

Applicants will be notified by March 20, at the latest. Information regarding registration and other logistical questions will be communicated afterwards. The full registration fee is EUR 50, doctoral students pay a discount 30 EUR registration fee.

If you have questions, please write to us: springtimeconf@ceu.edu