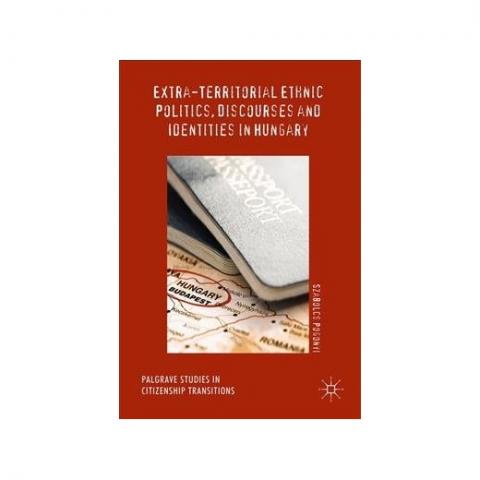 In a new monograph published by Palgrave Macmillan, Prof. Pogonyi explores the causes and consequences of the discursive and legal construction of the Hungarian transborder nation through the institutionalization of non-resident citizenship and voting. Through the in-depth analysis of Hungarian transborder and diaspora politics, this book investigates how the political engagement of non-resident Hungarians impacts inter- and intra-state ethnic relations. In addition, the research also explores how institutional changes and shifting discursive strategies reify and redefine ethnic belonging narratives and the self-perception of Hungarians living outside the country. The research uses a multidisciplinary qualitative methodology which includes institutional (historical, rational choice and sociological) analysis, discourse analysis as well as interpretive methods. Through the inventive application of multiple methodologies, the book goes beyond the mostly institutional/legal analysis dominant in the study of citizenship.

“Pogonyi’s book is not only the most comprehensive and best analysis of Hungary’s rather unique extraterritorial citizenship policies, it contributes also significantly to a more general understanding of the political dynamics of diaspora politics in Central and Eastern Europe and their impact on kin minorities. A must-read not only for those interested in the region, but also for all scholars of transnationalism and diaspora studies.” (Rainer Bauböck, Professor of Social and Political Theory, European University Institute, Italy)

“The extension of citizenship privileges to co-ethnics abroad is one of the most striking trends in contemporary citizenship. There is no better compass for this than Szabolcs Pogonyi`s impressive first book in English. Pogonyi shows how Hungarian populists used the process to build `illiberal` democracy at home.” (Christian Joppke, Executive Director and Professor of General Sociology, University of Bern, Switzerland)

“Pogonyi’s book is a masterful study of Hungary’s extraterritorial citizenship policies.  Combining theoretical depth with nuanced comparative empirical analysis, the book provides a compelling explanation for why Hungary has developed arguably the most activist strategy of transborder nation-building in Central and Eastern Europe.  It also offers the first comparative account of how a kin-citizenship project impacts the identity-formation and democratic claim-making potential of transborder minorities in their home states.  A must-read for scholars and policy-practitioners alike.” (Zsuzsa Csergő, Associate Professor of Political Studies, Queen’s University, Canada)