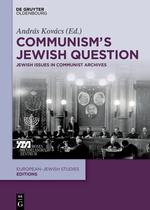 The international publisher De Gruyter just published the new book of András Kovács, professor at Nationalism Studies/Jewish Studies under the title Communism’s Jewish Question.  In the last two decades a trove of previously secret documents on Jewish issues emerged from the newly opened Communist archives. The volume brings a selection of these papers, primarily from Hungarian archives, which shed light on a period of Jewish history that is largely ignored because the Shoah is often considered the end of

Jewish history in the region. The documents selected, introduced and commented by András Kovács stem from the hardly researched post-Stalinist period (1956-1989). They are organized around five subjects: relations to Israel, the Eichmann-case, the war in 1967, contacts with international Jewish organizations and, last but not least, the mechanisms of repression.  The book reveals the conditions and constraints under which the Jewish communities, above all the largest one, Hungary, survived in the post-Stalinist era. The documents shed light on the ways in which the “Jewish policy” in the Soviet bloc was coordinated and orchestrated from Moscow. The main message of the book is that the communist parties were permanently preoccupied with the “Jewish question,” and this preoccupation helps explain the reemergence of anti-Semitic language at the end of the communist period and beyond.