For first-hand experience get in touch with our recent alumna Arin. (Agich_arin@alumni.ceu.edu) Arin graduated from the 2-year MA program in 2019, and is happy to help answer any admissions-related questions you might have.

Borbála was born and raised in Budapest, Hungary. She did her BA in Sociology at ELTE Budapest, and spent one semester at the Vrije University Amsterdam as an Erasmus student. This is where she decided that she wants to deal with the questions of ethnicity and nationalism, and applied to CEU. After her graduation in 2016, she started to work for Centropa, an international NGO aiming to preserve Jewish memory. Since last year, she is the head of the Hungarian office.

Mario Macías is currently pursuing a doctorate in Sociocultural Anthropology and Latin American studies at the University of Arizona. He obtained his BA in Cultural Anthropology from the Universidad de las Américas Puebla, Mexico (2015) and his Master's in Nationalism Studies from Central European University (2017) under the supervision of Dr. Szabolcs Pogonyi. His research focuses on return migration, gender and migration, Mexico-United States borderlands, settler colonialism, indigeneity and identity, and proletarianization processes.

Currently Mario is working on the project "Beyond Concrete and Violence: The reconfiguring of local dynamics in Nogales Arizona / Sonora borderlands since the early 2000s" under the supervision of Dr. Diane Austin at the Bureau of Applied Research in Anthropology at the University of Arizona. Mario conducts interviews in both Nogales with migrants, local inhabitants, NGOs, and federal organizations from the region.

Mario has an ethical and moral commitment through his research on the humanization of migrants, border communities, Latinx and Chicanx communities in their struggle for belonging.

Fun Fact - Mario is a beekeeper and cycling enthusiast.

Nationalism Studies Program was an excellent space for my academic development and personal growth thanks to the diverse and wide range of students, professors and staff. For me, an unforgettable experience. 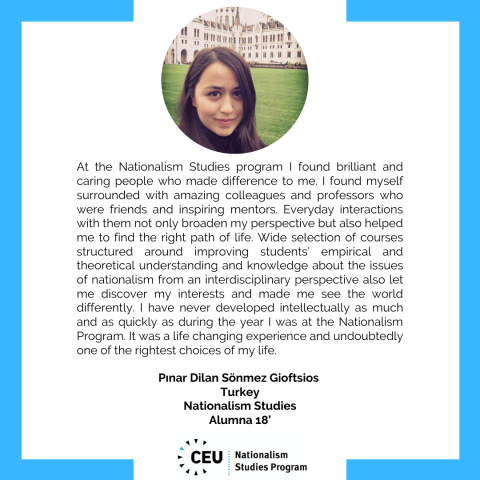 At the Nationalism Studies program I found brilliant and caring people who made difference to me. I found myself surrounded with amazing colleagues and professors who were friends and inspiring mentors. Everyday interactions with them not only broaden my perspective but also helped me to find the right path of life. Wide selection of courses structured around improving students’ empirical and theoretical understanding and knowledge about the issues of nationalism from an interdisciplinary perspective also let me discover my interests and made me see the world differently. I have never developed intellectually as much and as quickly as during the year I was at the Nationalism Program. It was a life changing experience and undoubtedly one of the rightest choices of my life.

Pınar graduated from the International Relations department of Ankara University in 2011. She took her first master degree from the Political Science and History department of Panteion University in Athens in 2014. She joined the Nationalism Studies Program in 2017 and she wrote her MA thesis under the supervision of Prof. Szabolcs Pogonyi on the discursive construction of exclusion in Turkey and naturalization of Syrian refugees. After graduating from the program, Pınar continued her studies at Bilkent University in the department of Political Science and, at the same time, she was a doctoral researcher in a project on the role of informal institutions in sociopolitical life funded by the Scientific and Technological Research Council of Turkey. During the first year of her PhD, she also worked as an advisor in the Red Umbrella Sexual Health and Human Rights Association. Pınar is now a PhD candidate at Bilkent University and continues to explore the conceptualization of citizenship in everyday life and subject formation among different ethnocultural groups.

Fun fact: Pınar does not let anyone but herself prepare cheese plate since she loves slicing cheeses symmetrically according to their shapes. 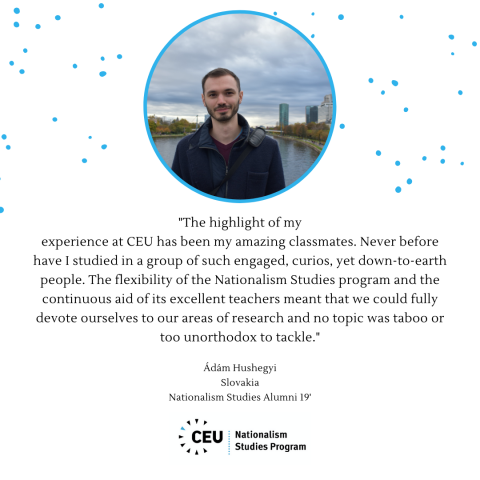 Ádám Hushegyi graduated from Charles University in Prague, earning a BA degree in English Literature and Linguistics (2014) and an MA in North American Studies (2017) before pursuing his second master’s degree at Nationalism Studies’ one-year program (2019). Building on his interest in visual arts and new media, Ádám’s thesis (supervised by Prof. András Kovács) focused on the political relevance of video games and how audiences use them to engage in heated debates about identity politics. Since graduating from CEU, Ádám has worked on numerous documentary film projects, ranging from festival films to visual research projects. He currently works as Media & Visual Education Assistant at CEU.

"The highlight of my experience at CEU has been my amazing classmates. Never before have I studied in a group of such engaged, curios, yet down-to-earth people. The flexibility of the Nationalism Studies program and the continuous aid of its excellent teachers meant that we could fully devote ourselves to our areas of research and no topic was taboo or too unorthodox to tackle."

Fun Fact: Ádám was the first student to write a thesis on video games at our department (and possibly at CEU) 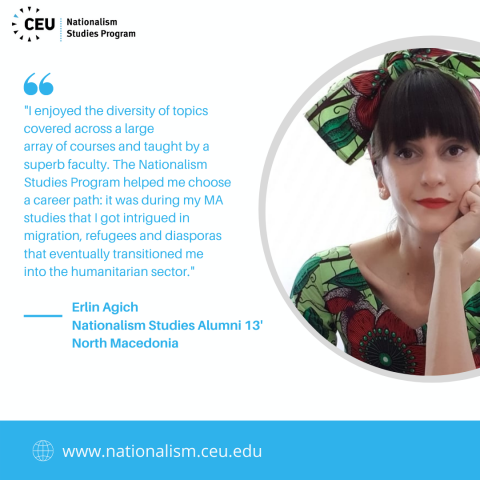 Erlin is a PhD Candidate at CEU’s Doctoral School of Political Science who is currently on leave of absence as she is working on an aid project in Nigeria. Erlin’s research interest is in international learning processes and humanitarian conferences. Before starting her PhD, Erlin worked in several humanitarian responses to the Syrian crisis – in Lebanon, Jordan, Turkey and the Greek islands. Erlin is also a Co-founder of a small NGO called “Stella” that implements gender equality projects in her home country of North Macedonia.

Erlin is one of the two Agich sisters who have graduated from the Nationalism Studies Department. She is also the smarter one :)

I enjoyed the diversity of topics covered across a large array of courses and taught by a superb faculty. The Nationalism Studies Program helped me choose a career path: it was during my MA studies that I got intrigued in migration, refugees and diasporas that eventually transitioned me into the humanitarian sector. 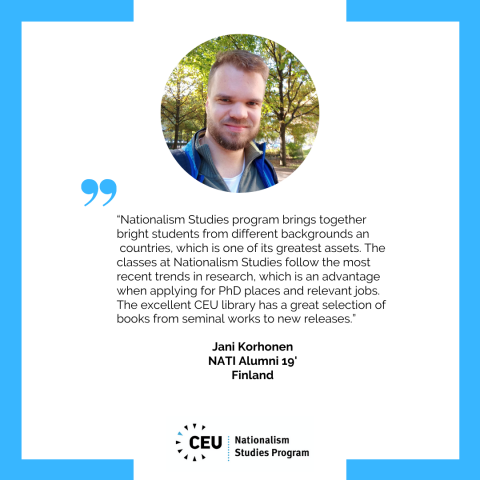 Jani Korhonen graduated with an MA from University of Helsinki in 2017, where his major was Hungarian language and culture. At CEU, he wrote his thesis on non-ethnic declarations in the 2013 Bosnian census under the supervision of Prof. Mária Kovács. During his studies, he was also part of the poll aggregator Europe Elects team. Currently Jani is working at the Finnish Institute of International Affairs in Helsinki.

“Nationalism Studies program brings together bright students from different backgrounds and countries, which is one of its greatest assets. The classes at Nationalism Studies follow the most recent trends in research, which is an advantage when applying for PhD places and relevant jobs. The excellent CEU library has a great selection of books from seminal works to new releases.”

Jani had his application interview for Nationalism Studies, when he was visiting Kazakhstan. 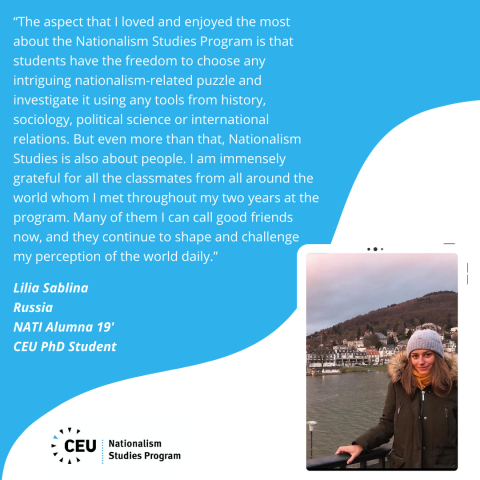 In 2016, Lilia graduated from the History department of the Higher School of Economics in Russia. She joined the Nationalism Studies Program in 2017 and she wrote her thesis under the supervision of Prof. Szabolcs Pogonyi on the right-wing populist online mobilization of the Russian-speaking minority in Germany. Part of her thesis was later published in the Nationalities Papers, which is one of the leading journals in the field of Nationalism Studies. After graduating from the program in 2019, she continued her studies at CEU as a PhD student at the Doctoral School of Political Science, Public Policy and International Relations. She is now at her second year and continues to explore the patterns of intra-minority micro-mobilization, both online and offline.

“The aspect that I loved and enjoyed the most about the Nationalism Studies Program is that students have the freedom to choose any intriguing nationalism-related puzzle and investigate it using any tools from history, sociology, political science or international relations. But even more than that, Nationalism Studies is also about people. I am immensely grateful for all the classmates from all around the world whom I met throughout my two years at the program. Many of them I can call good friends now, and they continue to shape and challenge my perception of the world daily.”

“The Nationalism Studies Program at CEU brings a brilliant and diverse group of people together to puzzle over the burning questions of today, questions like: What is the cost of citizenship? Why is the nation-state so enduring? Thinking through these questions at CEU was an intellectually formative (not to mention rewarding) experience for me. It was good fun, too, and I treasure the friendships I made in Budapest. I count myself lucky to have gone to CEU, and I’d recommend the Nationalism Studies Program in a heartbeat.”

Noah is from New York and studied history at Georgetown University (BA, 2017) before coming to the Nationalism Studies Program. He pursued a Jewish Studies specialization at CEU, writing his thesis under the supervision of Prof. Michael Miller about Jewish-American lobbying during the Cold War. After graduating in 2018, he joined the non-governmental organization Freedom House, where—alongside several other CEU alumae/i—he surveys democracy and human rights from Central Europe to Central Asia. 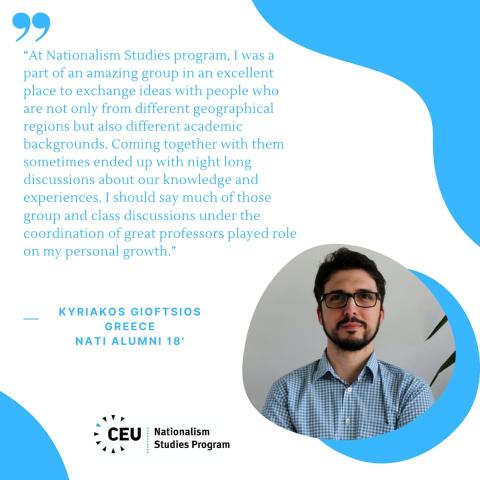 “At Nationalism Studies program, I was a part of an amazing group in an excellent place to exchange ideas with people who are not only from different geographical regions but also different academic backgrounds. Coming together with them sometimes ended up with night long discussions about our knowledge and experiences. I should say much of those group and class discussions under the coordination of great professors played role on my personal growth.”

Kyriakos studied political science and history at Panteion University in Athens (BA, 2012). Kyriakos’ thesis at CEU (supervised by Prof. Michael Miller) focused on the concepts of nation and national identity especially the Greek identity in late modern period Ottoman empire. He currently works in a multinational company associates with digitalization in field of finance and business management in Budapest and continues his academic research as an independent researcher.

Fun Fact: He has a stamp collection from the 19th century and he can read Ottoman language

Eric: "The CEU Nationalism Studies program is much like Budapest itself. It's a place that works best for self motivated people, and where such people have access to tremendous resources. This applies within the department, university, and the city itself. If you have a driving motivation for learning and scholarship I think it's a great place to let yourself go and pursue your passion."

Amy: "I especially enjoyed the Nationalism Studies program because of its interdisciplinary nature. It offered a comprehensive insight into important themes whilst also leaving enough room for delving into my specific interests, where necessary by taking courses in other departments. I felt very supported by the department and that greatly contributed to the fond memories I have of my time at CEU."